Entering the gates of Castillo San Felipe del Morro is like walking 5 centuries into the past, where you can get immersed in the intriguing history of one of the most significant places in the Western Hemisphere.  El Morro became the most successful defensive position in the New World.  It was never defeated by the sea, and it only fell once when taken by land in 1598.  History buffs from all over the globe travel to experience this world-class attraction declared a UNESCO site.

El Morro is the most recognized landmark in Puerto Rico and the most beloved by Puerto Rican families.  Just about every child has run on the Esplanade flying a kite.  Every level has breathtaking views of the Atlantic and colorful walled islet, making it a popular spot for photographers, many couples come to El Morro for wedding photographs.  If you’re in San Juan for a day, this fortress is one attraction you don’t want to miss. 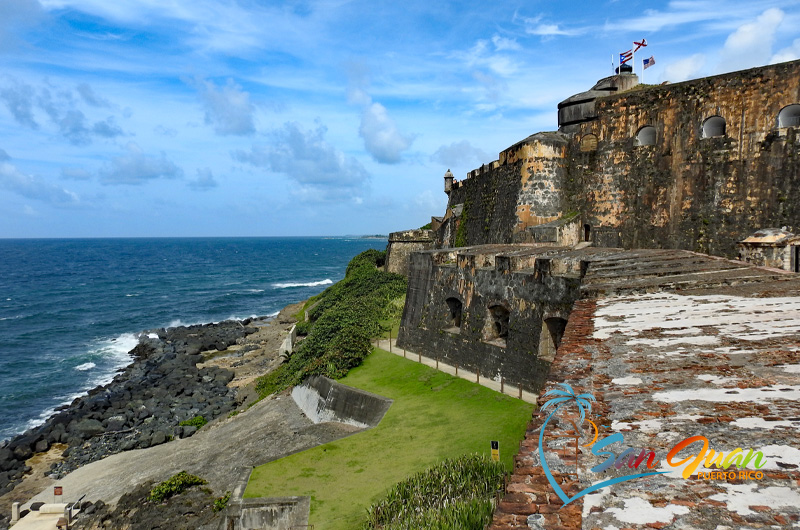 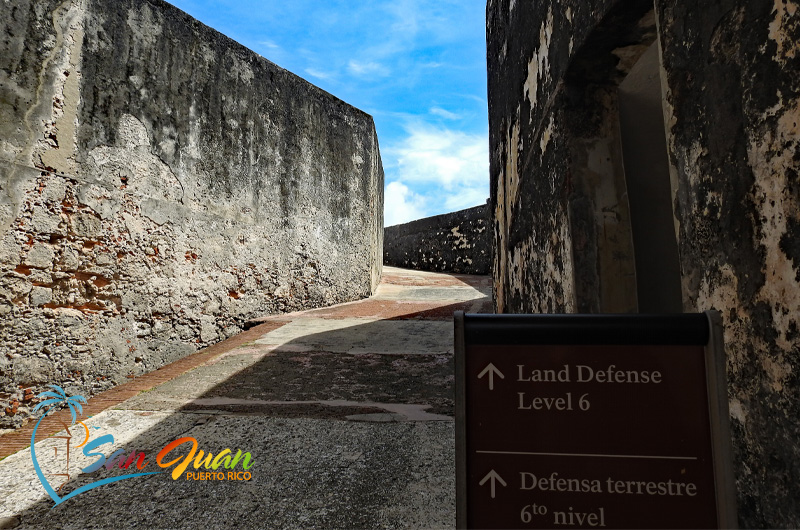 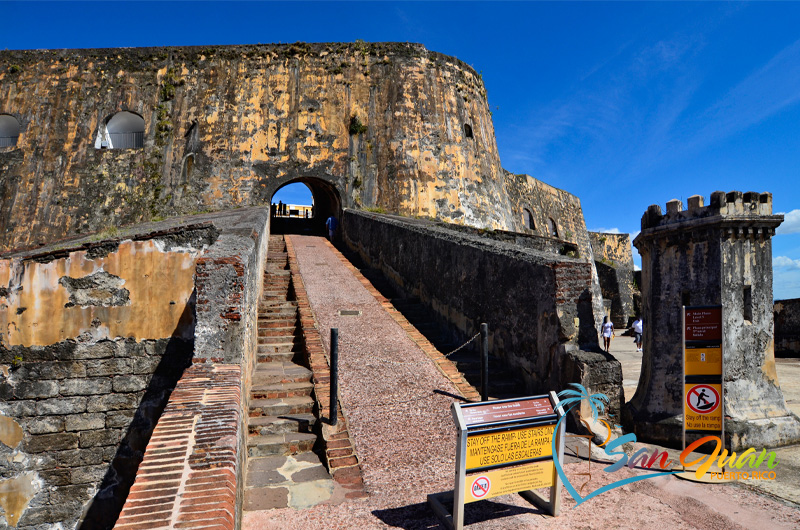 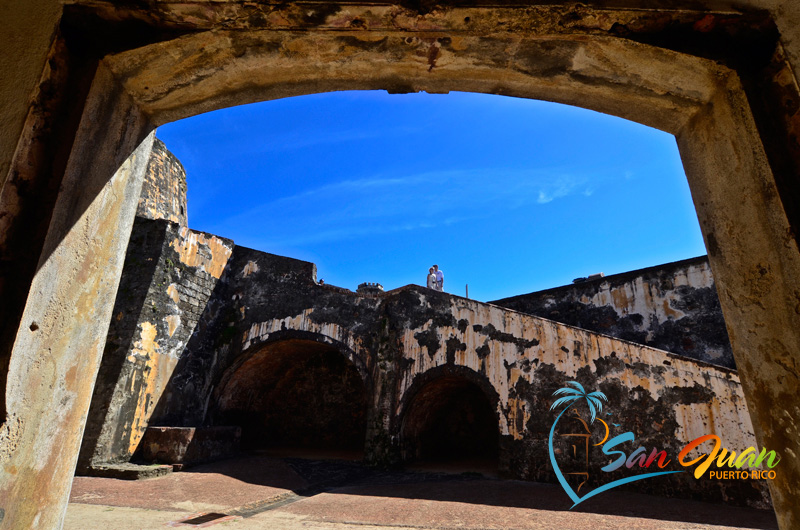 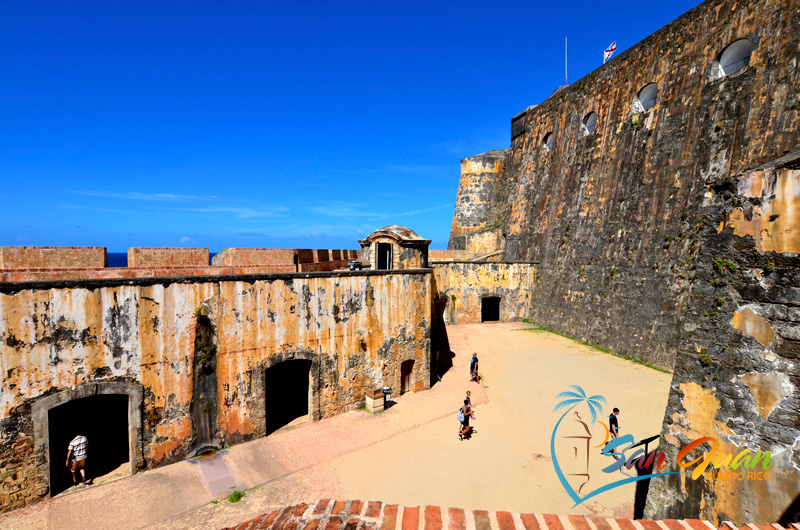 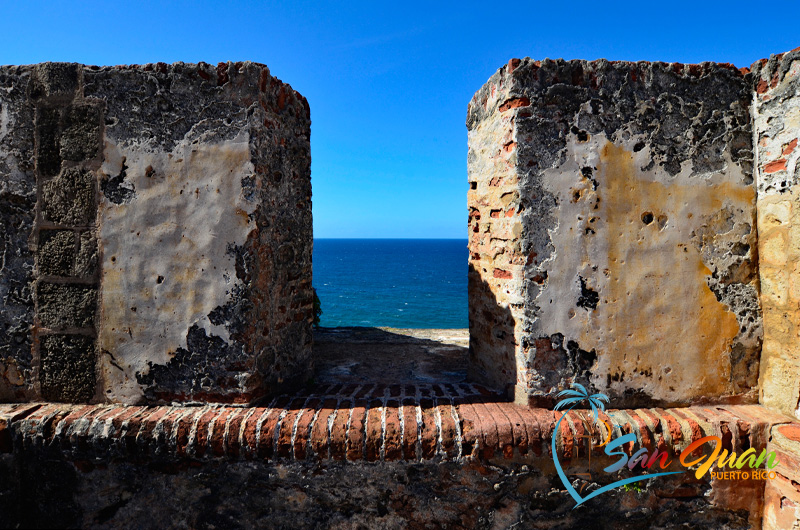 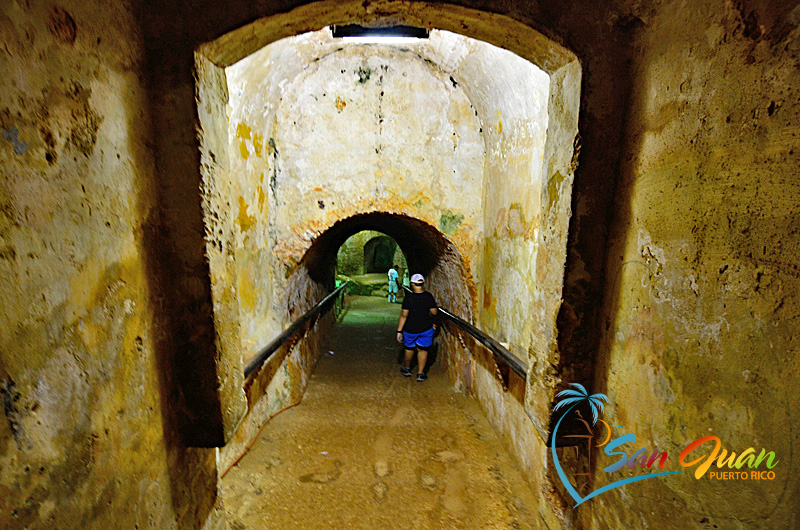 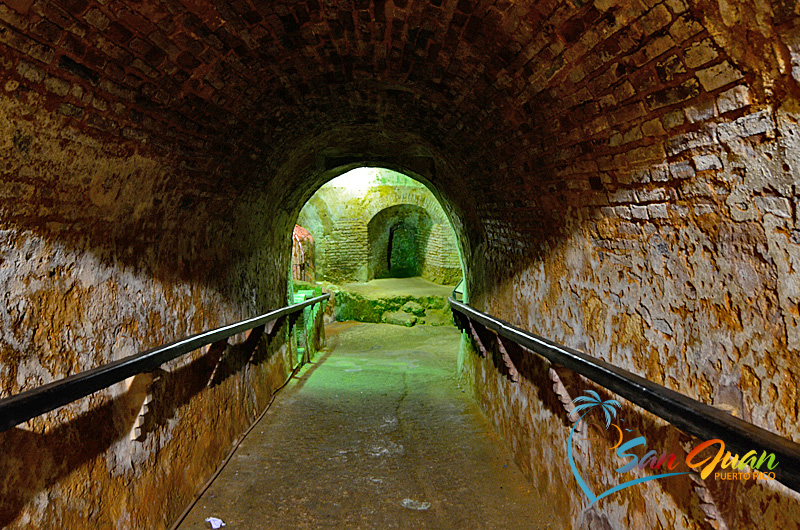 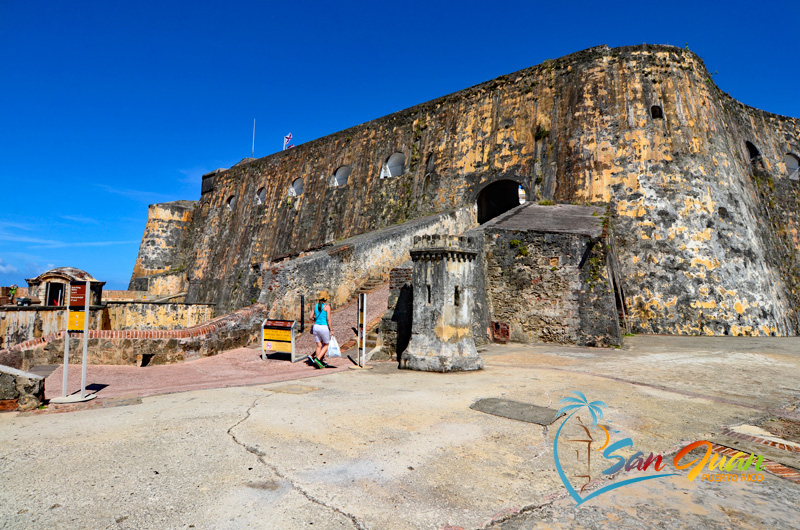 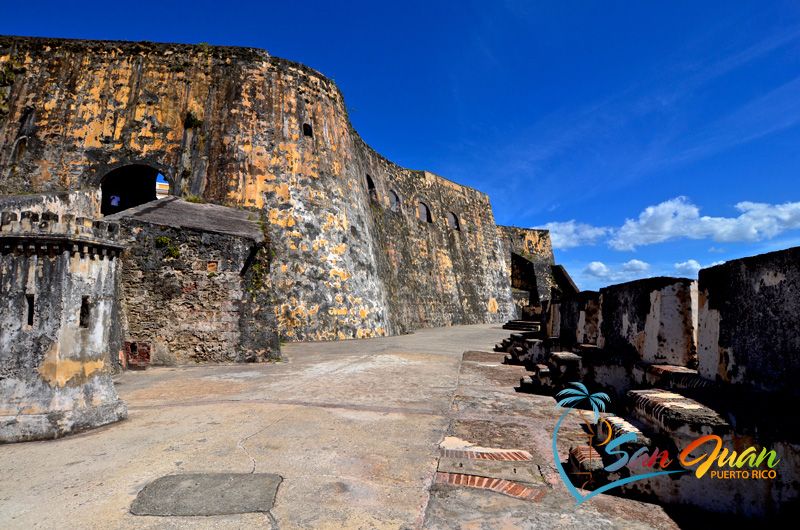 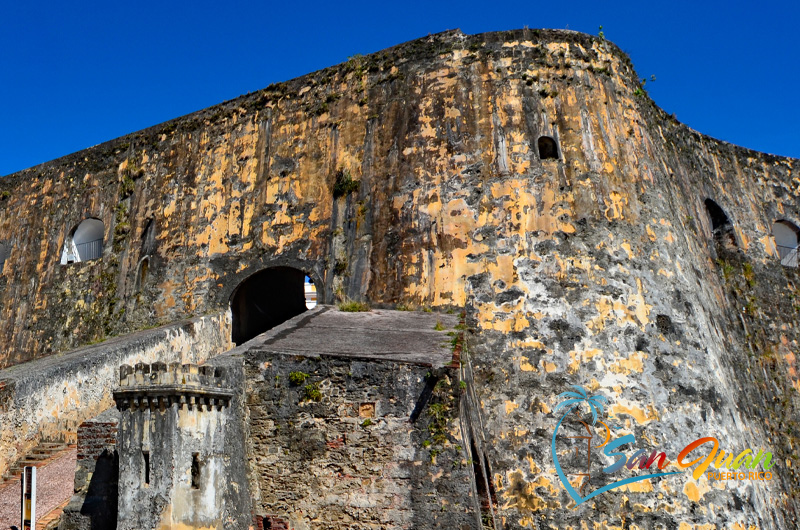 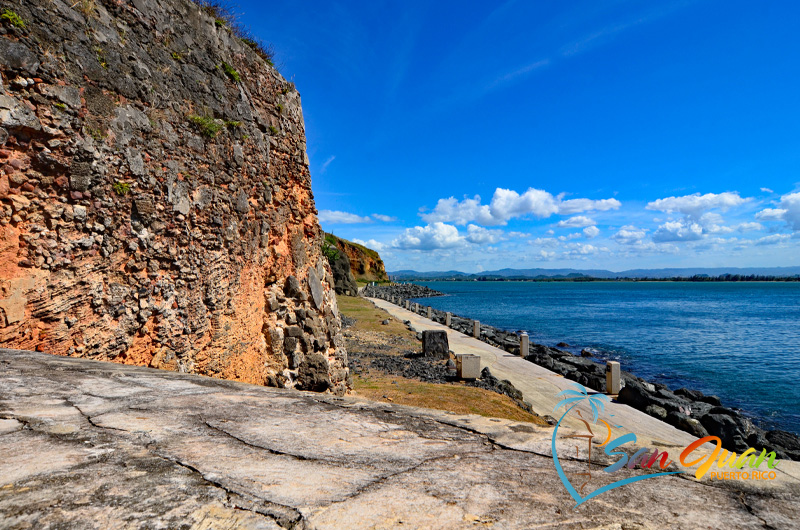 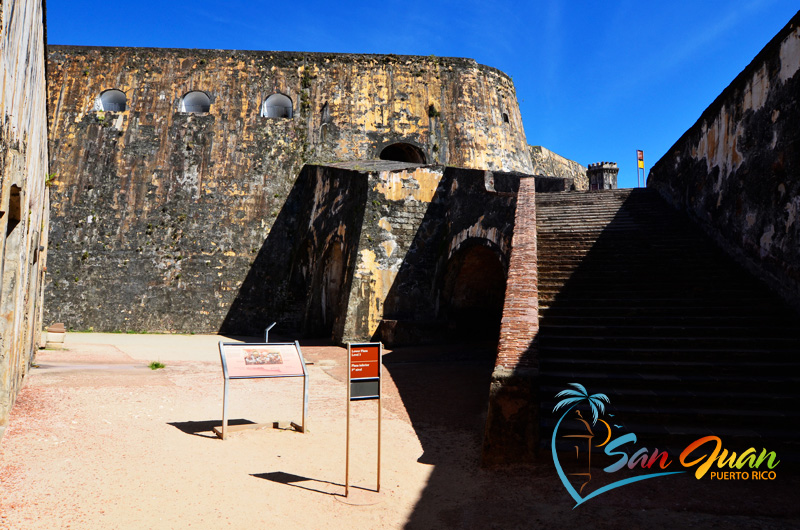 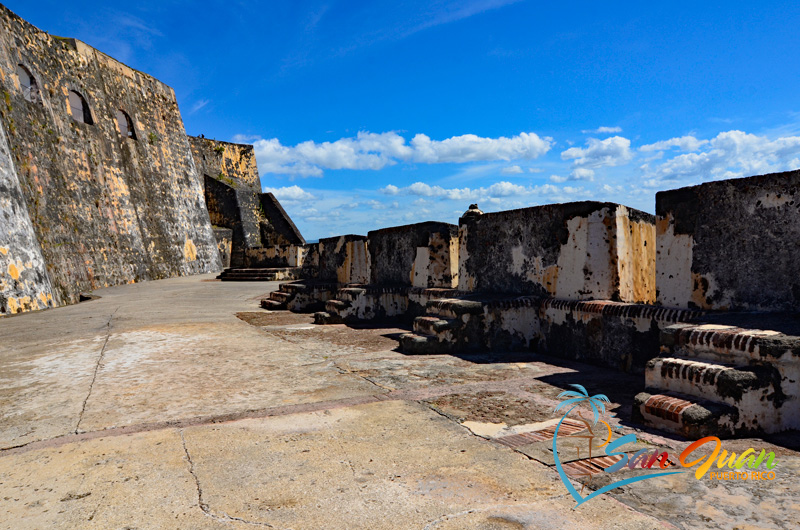 Castillo San Felipe del Morro, commonly known as “El Morro” is one of the most scenic locations in the Caribbean with resplendent architecture.  This fort was designed for serious reasons, today this historic site can be a lot of fun to explore for people all ages.  El Morro is divided into six levels, each offering something interesting even for children, with rewarding awe-inspiring views.

Most of the levels can be reached through ramps, there are some steep steps to the lower levels but individuals with physical challenges can still enjoy various levels of the fort.

The Spanish established a colony in Puerto Rico in 1508, not before long conflicts arose with the native Taino community and later with the Caribes, leading the Spaniards to build fortified houses to protect supplies and provide refuge for citizens.  By the 1530’s threats to the colony came from privateers and pirates seeking the wealth flowing in and out of the island.  The battery and tower built in the 1500s to protect the harbor would become the basis for Castillo San Felipe del Morro.  During the 1800s the light house was added to guide ships into the harbor.  In the late 1800s when Spain’s fortunes began to decline, San Juan’s defenses were very slow to modernize.  As tensions with the United States increased Spain rushed to install modern artillery guns to the fort, but by the time war broke out only 11 were installed.  When the United States entered WWII the defenses were modernized with the addition of bombproof command bunkers, observation towers, and gun emplacements to protect the port.

The threat to San Juan from Spain’s rivals meant that defenses had to be added in order to repel attacks.  Batteries and more defenses were added to the El Morro tower in the 1580s making it an impenetrable stronghold for the city.   In 1765 Castillo San Felipe del Morro underwent considerable renovation due to military reform.  They added more batteries, built new quarters for the troops and new walls.  The most noticeable changes were the additions of the high walled citadel and the “Y shaped” Santa Barbara battery.  By 1790 El Morro was a powerful fortress with its defenses built in six levels.

The Garitas of El Morro 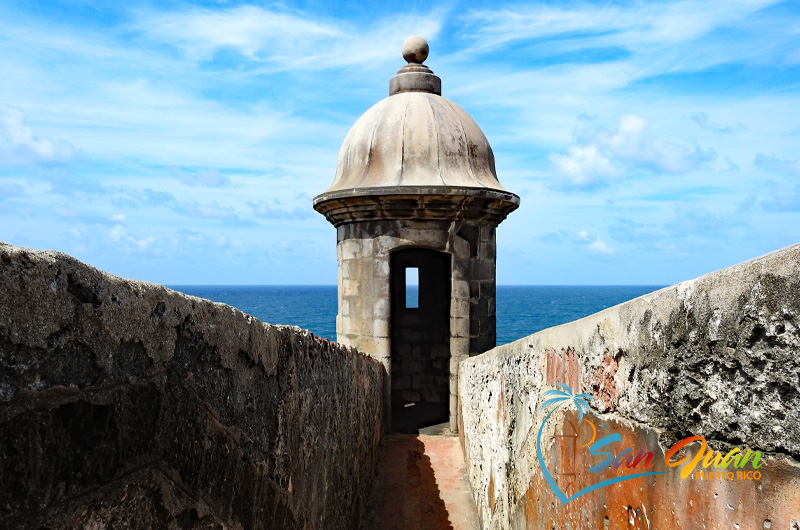 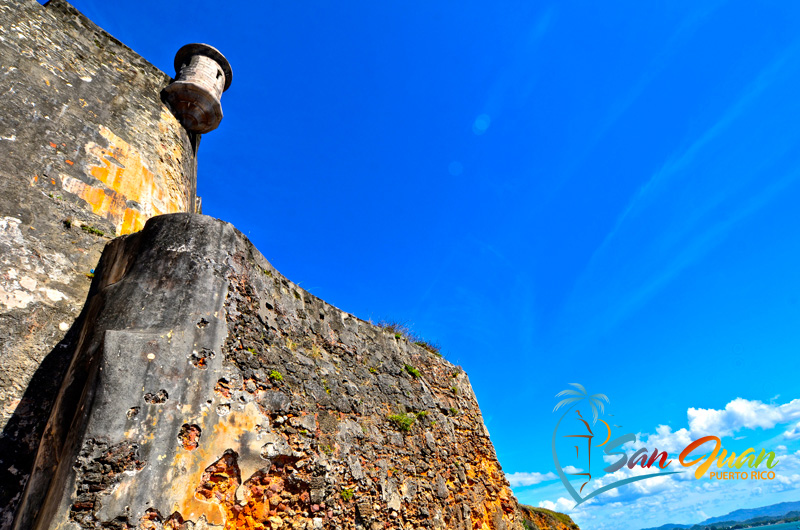 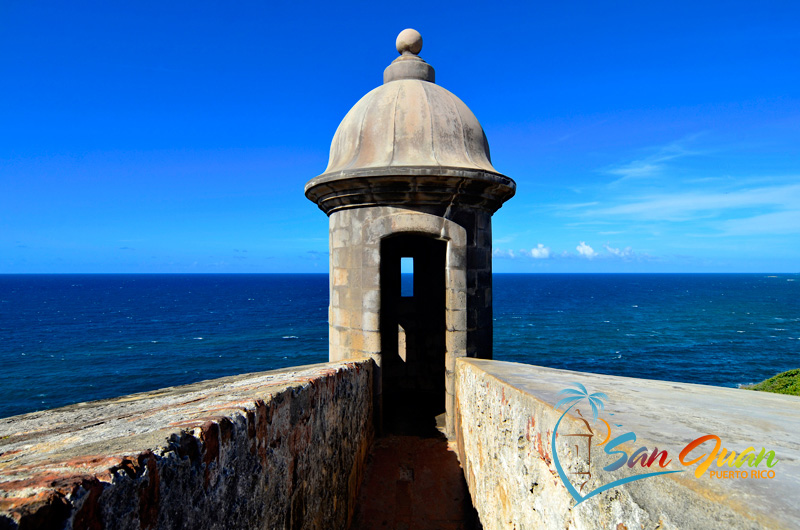 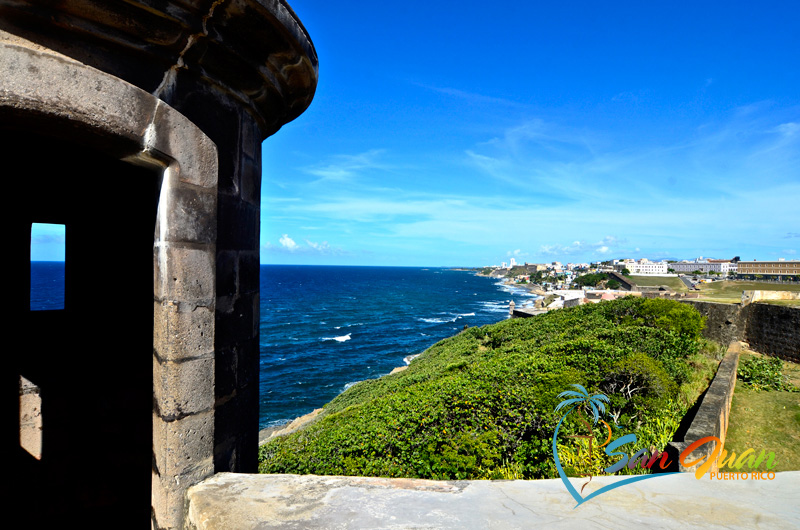 As you walk around, you’ll encounter Garitas, small enclosures where the Spaniards stood guard, today you can enjoy fantastic views.  Garitas are loved by children, keep your eyes on them, they love to hide inside.

Romantics, don’t miss taking a photo at the entrance and don’t forget to kiss, Garitas are a symbol of power…there’s power in love.  The Garitas are among the most recognized and iconic symbols of Puerto Rico. 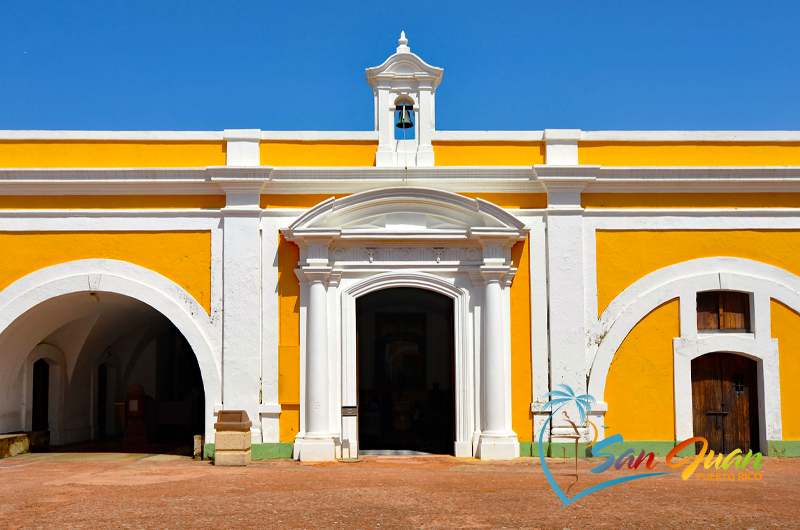 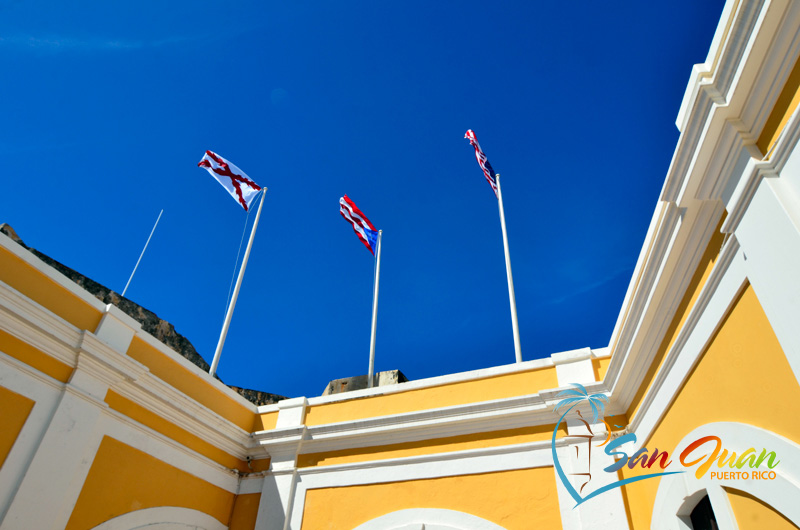 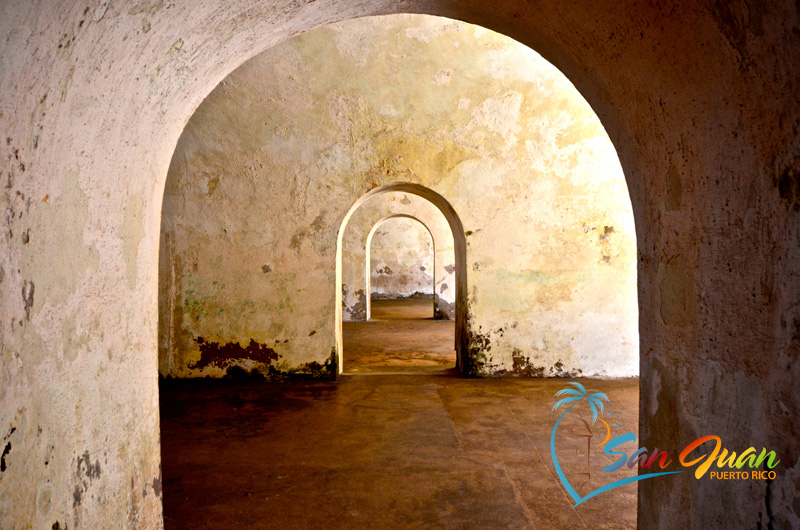 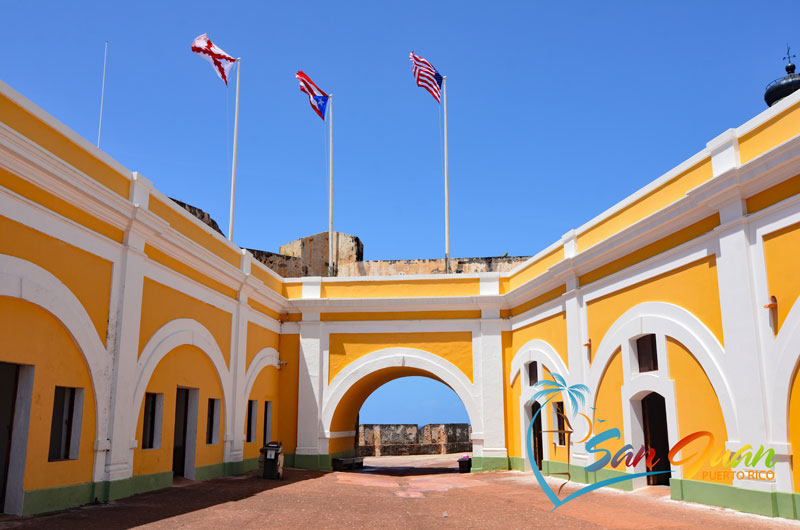 The plaza, completed in 1780, was a safe well guarded place, where most activities of daily life took place.  Rooms called casemates surround the plaza, among them you’ll tour a kitchen, a chapel, barracks for soldiers, and officer quarters.  Exhibits with historical facts will satisfy history buffs.

During the early years, Spain’s European rivals attempted to take over San Juan by force.  In 1595 the English attempted to take San Juan by force when Sir Francis Drake led a naval attack against the city.  The attack was repelled by artillery fire from the El Morro fortress. Later in 1598 another attack led by George Clifford managed to land troops and seized the city.  After a few months, the English were forced to abandon the city when the troops started to suffer from sickness and exhaustion.  In 1625 the Dutch sacked and burned San Juan but were not able to take El Morro, they were eventually driven back to their ships and fled Puerto Rico.

In April of 1898, Spain and the United States went to war.  On May 12th of the same year the United States North Atlantic Squadron bombarded San Juan from the sea.  Ramón Acha Caamaño, the commander of the Santa Barbara Battery at El Morro, returned fire against the ships bombarding the city.  On July 25th, American troops landed in Guanica starting a brief land campaign that would lead Spain to surrender.  On August 13th of 1898, the United States and Spain reached an armistice with the United States receiving control over the territory of Puerto Rico.

In March 1915, when the United States was still neutral, the armed German supply ship Odenwald tried to leave the San Juan harbor without permission, Lt. Teofilo Marxuach, then ordered his men at El Morro to open fire on the vessel, which forced it to return to port, which led to German protests of anti-neutral behavior.  During WWII El Morro was part of Fort Brooke, which housed the staff of the Antilles command that coordinated operations in the Caribbean.  The old Spanish barracks were also converted to Rodriguez Hospital which not only served military personnel but also the civilian population.  During nightfall, blackouts were imposed in the city so the locations of merchant ships would not be revealed to enemy submarines waiting offshore.  El Morro also served as the administrative center for Puerto Rican units.  Portions of the Porto Rico Provisional Regiment of Infantry were stationed in the fortress in 1901 and in 1920, the unit was reorganized as the 65th regiment of infantry.  The regiment, known as the “ Borinqueneers” was headquartered in the fort until 1956 when the fort was transferred to the National Guard.

In 1961 the United States military left the fort, it became part of the National Park Service to be preserved.  In 1983, Castillo San Felipe del Morro was declared a World Heritage Site by the United Nations.  In 1992 during the quincentennial of Columbus’ voyages, the palm trees were cleared from the large open “ field of fire” and the paved roads and parking lots removed to restore El Morro to its original appearance.

The Grounds of El Morro 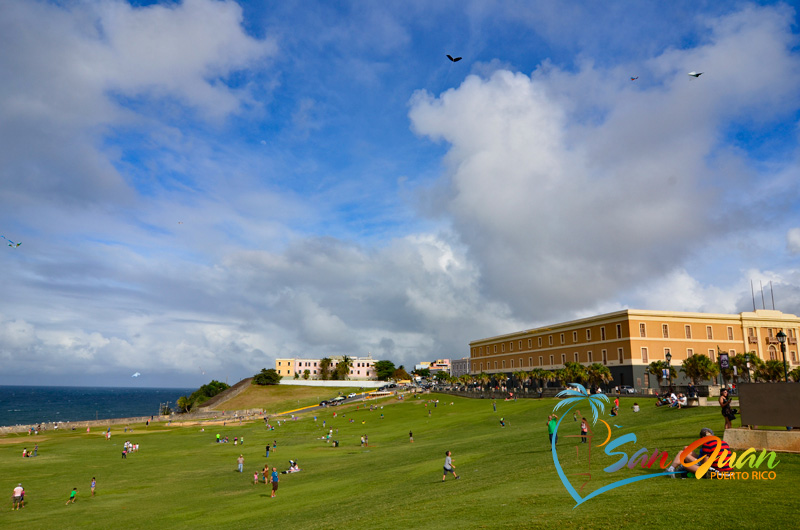 The lawn that soldiers used to march on, is now a very happy and lively place.  Before or after touring El Morro, be sure to do one of the most beloved activities by families in San Juan…flying a kite on the grounds of this magnificent place.  The constant trade winds provide the perfect conditions for the most fun you’ll ever have flying a kite.

During weekends, and especially the summer months, the laughter of children fills the space as they run around the grounds.  The laughter and happiness are contagious, the energy of this place is beyond words.  You can find inexpensive kites at nearly every shop in Old San Juan and street vendors around El Morro.

The first golf course in Puerto Rico was on the grounds around the walls of El Morro.  The US Military built a nine-hole golf course during the 50’s when it was closed the second golf course was built in the town of Dorado. 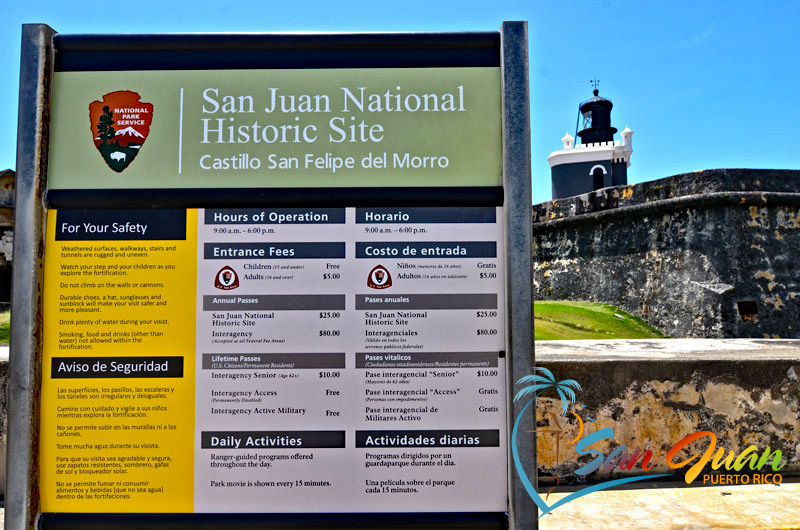 If you’re short on time and don’t wish to do a walking tour, you may take the free trolley.  Take a look at our Calle Norzagaray walking tour.

We use cookies on our website to give you the most relevant experience by remembering your preferences and repeat visits. By clicking “Accept”, you consent to the use of ALL the cookies.
Cookie settingsACCEPT
Manage consent

Any cookies that may not be particularly necessary for the website to function and is used specifically to collect user personal data via analytics, ads, other embedded contents are termed as non-necessary cookies. It is mandatory to procure user consent prior to running these cookies on your website.